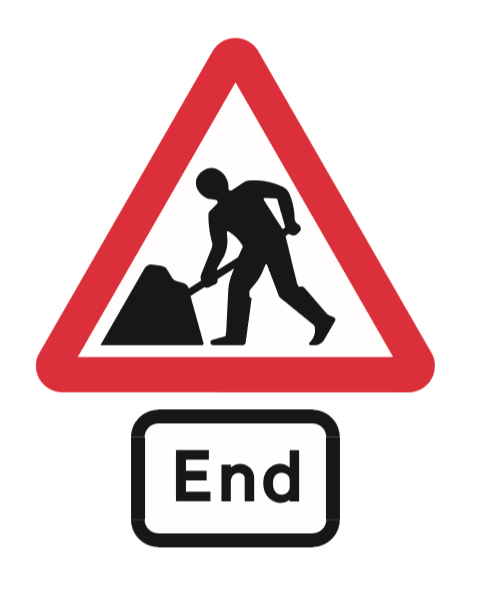 An end sign, consisting of a ‘Road works ahead’ sign in conjunction with a supplementary ‘End’ plate, indicates the end of works and the end of any temporary restrictions. You must place an end sign (in both directions) beyond works that are 50 metres or more in length (measured between the end of the lead-in taper and the beginning of the exit taper, i.e. excluding the length of the tapers). If there is a series of two or more sites close together, an end sign should only be placed after the last of these sites (in both directions), i.e. end signs should not be placed between closely spaced sites. The use of an end sign is optional for works less than 50 m in length unless there are two or more such sites close together.

End signs are not necessary at works on minor roads restricted to 30 mph or less that do not carry a significant volume of through traffic or many large vehicles.

If the permanent speed limit changes within a length of road covered by a temporary speed restriction: